I’m writing another blog for our website and as ever, I do so in the context of not being “an expert” but rather with a desire to share my experiences. In this instance it is an experience of trying some proper astro-landscape imagery.

I say “proper” because the photos below were taken on holiday in Cornwall last week. The significance of this is that it is one of the regions of the UK which has an official Low Light Pollution score; this allowed me to capture many more stars and detail than my “experiments” conducted here in Berkshire have so far yielded.

So, I think the first thing to say is that all the photographs below involved setting my alarm for 1am having checked the weather forecast meticulously before going to bed. I had the prospect of perfectly clear skies, a warm evening and little wind. For each of the three photos below I had already visited each location (the first example is actually in the garden of our accommodation). I had worked out my composition and checked where the target stars/milky way was going to be: I’m using and app called “Sky Guide”. In addition I had also worked out the Tide Times website so I knew I would have a receding tide at St Michael’s Mount (for my personal safety).

The experience of taking photos like this was amazing. Firstly, it was so outstandingly quiet around me: an owl flew past and hooted, some dogs were barking in the background and at St. Michaels Mount the water gently lapped around me as the half moon set over Penzance to my right. I was eventually joined here by one other photographer! And, as I alluded to earlier, the brightness and quantity of stars that I could see was just truly wonderful.

Now for my photos and the technical bit.

This first photo is taken in the grounds of the property where we were staying and shows the old mill (complete with waterwheel) below star trails in the night sky. I had composed this to incorporate the mill and as much of the sky pointing roughly northwards as I could without the tree blocking the view of the waterwheel – hence my need to create the composition in daylight. Looking north meant that I could get the rotation of the stars around the Pole (North) Star although could not actually include it in the composition even with my 10mm lens (on a crop factor 1.6x body).
The biggest challenge was to get the focusing correct as the stars do not show up well with the wide angle lens even in zoomed in Live View. Additionally I wanted to get the mill in focus with the added challenge of shooting as wide open as the lens would allow (f4.5). I got luck quite frankly and need more advice/practice on this topic. Exposure wise, each frame was 10 seconds which I chose as the maximum possible with getting blur due to the earths rotation. A 5 second gap, set on my Intervalometer allowed (in theory) the sensor to cool down, giving me 50 frames. One final frame was taken on the same 20 second exposure and I fired my flashgun twice at the mill and the tree. You can see on the left I got the angle a little bit wrong and my flash shows up; I needed to be pointing away from the camera – again I got lucky with the overall exposure on this frame quite frankly. ISO was set at 6400.

Processing of the images is actually quite simple – in Lightroom I have boosted whites a bit, boosted contrast and clarity a bit. I’ve used LR’s noise reduction too…maybe I can play with it a bit in other applications but it’s pretty good I think. Then these stings were synched across 50 frames before opening up as layers in Photoshop. I batch processed 10 frames in five batches, then blended the resultant 5 images to get the full star trails. Blending mode is “Lighten”.

The second photo here is taken at St. Michaels Mount – I’m on the cobble causeway as the water, which was only gently lapping around, receded. I’m on the same basic camera setting (ISO was 6400 I think). Focusing was much easier because I used the lights of Penzance, about a mile away, as an approximation of infinity. Its not quite spot on if I zoom in but good enough.

The image is a single shot, no compositing, and then simply processed in LR according to a “recipe” in one of Robert Harvey’s books:

Standing there in the quiet, photographing the amazing Milky Way, all alone was just great…until I was joined by another photographer at 3am, who insisted on using a huge flashlight to walk across the beach towards me: I ditched those frames!!!

My final image shows that it can also go wrong! I followed the same process, visited the site, same camera settings etc. It is a dolmen stone in the foreground, in the middle of a field, there is an old tin mine behind me and again, deathly silence all around. Bit spooky if I’m honest! But, my composition was wrong, I’ve not separated the dolmen stones from the horizon enough, critically I got the focussing horribly wrong. Nothing is in focus: not sure what I did here and was a bit cross. 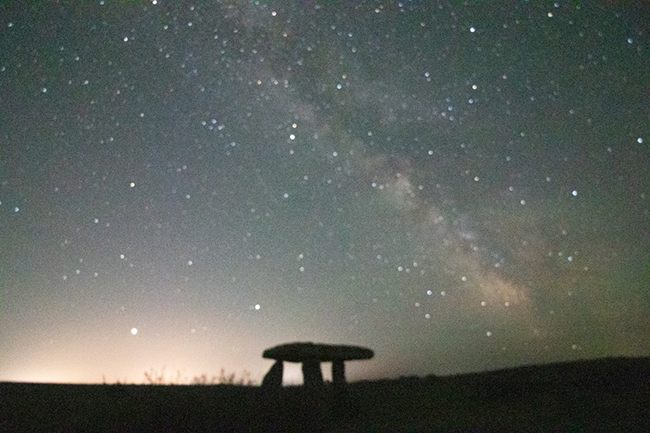 I did subsequently find a better image in my set:

I was overall pretty pleased with my attempts. What have I learned?:

I’m no expert but I hope I’ve given you have a flavour of what is possible if you get out at 1am!!!

Generally having fun, mostly outdoor genres of photography. I look after the Night Photography SIG for the club. If you are interested in going the DarKnights, give me a call 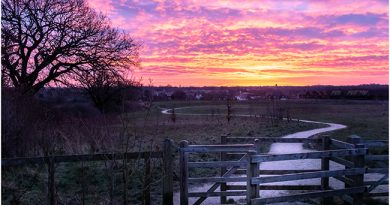 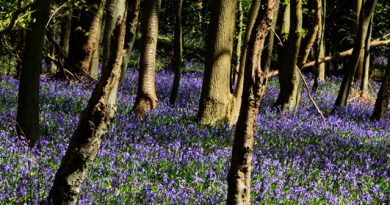 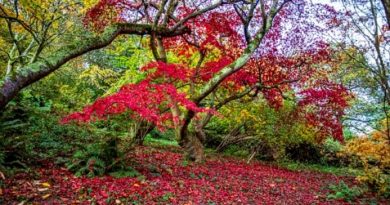